Banking at Your Fingertips!

Check Out Our Mobile App

Inland Real Estate Group, LLC, based in Oak Brook, IL, is one of the largest commercial property companies in the U.S., and a prominent commercial real estate customer of Parkway Bank for over 45 years.

From Rags to Riches

Inland started as a small business in 1968, led by four young college friends turned Chicago school teachers. Looking to supplement their modest teacher salaries, the team decided to pursue real estate on the side and attended real estate school. They began building houses one at a time, with money from friends and relatives.

In 1972, they took their small real estate startup full-time and were introduced to Parkway Bank by a business partner.

The aspiring entrepreneurs, in need of funds to expand their business, brought their loan request to Parkway Bank’s then-Chairman, Joe Zizzo. After careful review, Zizzo brought the young businessmen to the adjacent conference room to review their request before the weekly loan committee meeting. Cosenza and Goodwin recall being extremely nervous at the time, but upon reviewing the deal, the loan was approved.

That first loan was instrumental to both Inland and Parkway’s success, laying the foundation for an incomparable banking partnership spanning 45 years.

“When we first approached Parkway Bank as a small business, we had nothing, but they treated us like we were their best customers. We can bank with anyone, but we choose to bank with Parkway Bank because of how well we’re treated.” 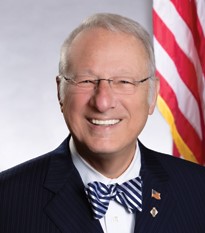 As Vice Chairman of The Inland Real Estate Group, LLC, Joe Cosenza has personally overseen, and/or negotiated, the purchase for Inland of $46 billion of income-producing real estate, in over 3,600 individual deals, of which over 700 are in the greater Chicagoland area. Joe also holds the prestigious honor of being inducted into the Chicago Association of REALTORS® (CAR) Hall of Fame.

Mr. Cosenza shares some of the reasons for Inland’s longstanding banking relationship with Parkway Bank, and the bank's signature loan process that has propelled Parkway to prominence as one of the largest commercial real estate lenders in both Chicago and Illinois.

In fact, all businesses—small or large—are assigned a Commercial Lending Officer to personally manage their lending relationship.

“Parkway knows the customer, they know the customer’s purchase, and they know what they’re doing,” says Cosenza. “No banks are run as well as Parkway.” 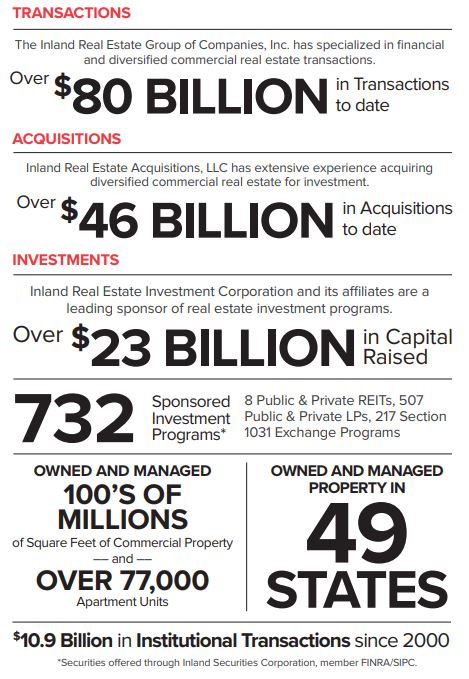 From their modest growth as a small business in Chicago, Inland has become one of the largest commercial real estate companies in the U.S. and is celebrating their 50th anniversary. To date, Inland has conducted over $80B in real estate transactions, $46B in acquisitions, and raised $23B in capital. They’ve owned and managed more than 77,000 apartment units, own property in 49 states, and employ over 1,000 people.

Throughout their success, three things have remained the same. Inland’s leadership by the four principals and founding members, a commitment to excellence, and their long-term relationship with Parkway Bank.

The Future is Bright

After 45 years, the long-term business relationship between Parkway Bank and Inland Real Estate continues to grow and flourish, with a loan relationship that cuts through the typical banking bureaucracy. Inland continues to acquire, lease, build and invest in commercial real estate, both as a developer and on the investment side through REIT’s, 507 Public & Private LP’s, and 217 Section 1031 Exchange programs.

Our history with Inland demonstrates our commitment to uncovering opportunities and fostering growth for promising local companies, which has enabled us to become a leader in Chicago’s commercial banking industry.