Banking at Your Fingertips!

Check Out Our Mobile App

Since its inception, Parkway Bank and Trust Co. has continued to maintain a strong presence in its communities through donations, volunteer work, and education. Although we’ve expanded to now include 32 branches, servicing several communities across both Illinois and Arizona, our commitment to our founding mission remains stronger than ever.

Stand Out Service and Services

When it comes to delivering you value at every touch point, our strategy is two-fold: provide state-of-the-art banking products backed by the kind of personalized, one-on-one service only offered at a bank that’s as rooted in the communities as Parkway Bank is proud to be. A few of these value-added services include:

By 1970 our communities were prospering with beautiful homes, excellent schools and flourishing local businesses. Parkway's financial strength became more apparent with the birth of its second bank, First State Bank of Chicago.

In August 1997, Parkway Bank & Trust Co. acquired Jefferson State Bank. This merger brought Parkway's assets to over $900 million. In the ensuing years, we continued to grow in the Chicagoland area.

In 2004, Parkway Bank purchased United Arizona Bank in Cave Creek, which expanded our footprint to the Phoenix, AZ area.

Our Arizona development has included the addition of seven more Phoenix-area branches, with the latest opening on Union Hills Drive in Phoenix in February, 2009.

Our newest Illinois offices were opened in 2010 in Carol Stream and in the West Loop at Morgan and Washington.

Currently Parkway Bank & Trust Co. has 32 locations in Illinois and Arizona and over $2.7 billion in assets. Our corporate headquarters are located in Harwood Heights. 2019 marks our 55th anniversary serving our local communities. 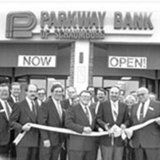